Last week we were informed by several customers that The Cuban Corner in Rockville (825 Hungerford Dr. in Saah Plaza) was closed without explanation.

Readers told us that online ordering was working (orders were not completed) and the phone would ring, but that the restaurant was actually closed.

A few days later a handwritten note was placed on the door that reads “Sorry we are vacation for the next month. We really apologize for you inconvenience.”

We reached out via email, but have not heard back. As of today, the Facebook page has the restaurant listed as “permanently closed,” the phone number has been disconnected, and there’s a sign on the door for a liquor license hearing for Ingera Rock.

According to google, Ingera Rock will be a restaurant serving Ethiopian cuisine. Their hearing is scheduled for February 20th. 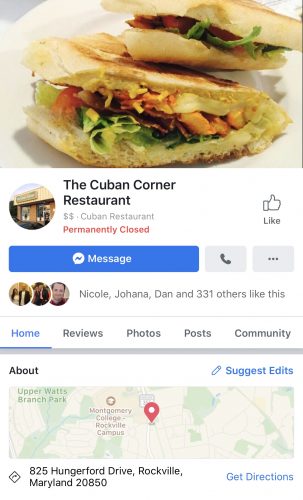