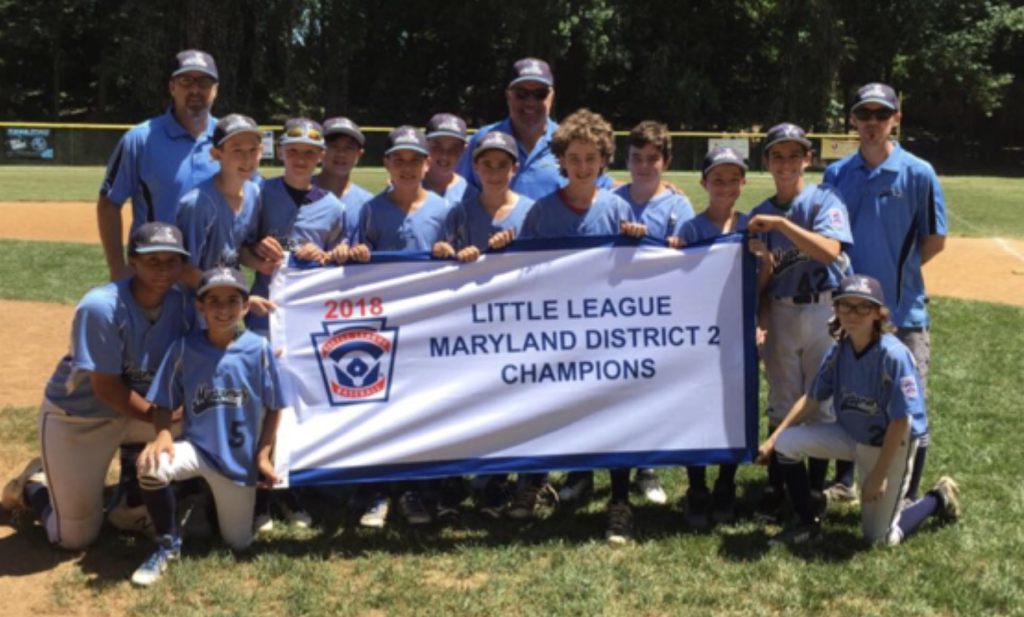 The District 2 Tournament began June 30th with 8 teams for the 12U Little League All-stars:

This is the first tournament in the road to the Little League World Series in Williamsport, PA which is every young baseball players dream.

The district tournament was not going to be an easy task as the returning District 2 champions, Thurmont Little League, was expected to be just as strong as last year with Frederick National and Brunswick Little League not far behind.

Game 1 (June 30 vs Brunswick LL)
Montgomery County Little League MoCo LoCo started the District 2 tournament against Brunswick LL.
the game ended up being a pitchers dual. A few silly errors and silent bats kept MoCo LoCo in the hole and they could not get anything started at any point in the game. MoCo LoCo lost, 5-1.

This meant they had to win their way through the loser’s bracket– with the potential of facing Brunswick at some point down the road.

Game 2 (July 1 vs Four County LL)
MoCo LoCo faced Four County LL at the MoCo LoCo home field North Chevy Chase Park. The MoCo LoCo bats started to come alive during a strong pitching outing by Max Ferguson. MoCo LoCo was able to come away with a 7-4 win, starting their long battle back through the loser’s bracket. Ferguson was able to strike out 7 in the game to keep the Four County batters in check. Jadon Bumbaugh closed out the game with 5 K’s in the last two innings.

Game 4 (July 3rd vs East Frederick LL)
MoCo LoCo 12U All Stars defeated EFLL 12U All-Stars 10-0 on Tuesday, as two pitchers combined to throw a shutout. Tristan Davis struck out #8 to finish off the game.
MoCo LoCo got things started in the first inning when Jadon Bumbaugh doubled on a 0-1 count, scoring one run.
MoCo LoCo put up five runs in the third inning. Their big bats in the inning were led by singles by Isaac Kreisler and Sam Deichman, and a double by Ian Alves. Max Dober went 2 for 2 in the game while Asher Friedman and Isaac Kreisler went 3 for 3, securing the hits needed to walk away with the game.
Isaac Kreisler toed the rubber for MoCo LoCo All Stars. He went three and a third innings, allowing zero runs on two hits, striking out eight, and walking zero.

Game 6 (July 6 vs Brunswick LL)
To no-one’s surprise, MoCo LoCo’s first championship game would be against Brunswick LL, who ended up making it through the bracket undefeated. A tough task, as they’d have to win this game on their home field and then once again the next day to win it all.

MoCo LoCo managed through a push by Brunswick LL 12U All-Stars in the fifth inning where MoCo LoCocoughed up three runs, but MoCo LoCo was able to pull out a 4-3 win in the end.

Jadon Bumbaugh was on the pitcher’s mound for Montgomery County LL 12U All Stars. He went four and a third innings, allowing two runs on four hits and striking out eight.

The final push came in the last inning with the bases loaded and Brunswick LL’s pitcher threw a wild pitch that went back to the backstop allowing Miles Kessler to make a dash for the plate scoring the game wining walk off run.

Brunswick LL started out Strong in the first half inning, putting up 5 runs on the board.

MoCo LoCo answered by putting up 10 runs in bottom of the first inning.

Montgomery County LL 12U All Stars grabbed an early lead. Montgomery County LL 12U All Stars scored on a fielder’s choice by Isaac Kreisler, a single by Asher Friedman, a walk by Sam Deichman, a lightning tripledown the 3rd base line by Tristan Davis, followed by a double by Miles K, and then a home run by Jadon B in the first inning. That was Bumbaugh’ s 2nd home run of the tournament and both had critical game winning implications.

Asher led things off on the pitcher’s mound for MoCo LoCo going one-third of an inning, allowing five runs on four hits and walking zero. Brandon Sun came in to finish 4 solid innings only allowing 3 runs and striking out 5.

After a rough start by Brunswick’s opening pitcher their reliever threw the final four and two-thirds innings in relief giving up 4 earned runs in total.