With the Popeye’s chicken sandwich still making headlines, MoCo based restaurant Mamma Lucia has decided to throw its hat into the game.

David Kottler, general manager of the Mamma Lucia in Federal Plaza (Rockville), invited me over to give it a shot.

I stopped by on Friday afternoon with a few members of the North Bethesda Middle School P.E. department. We ate lunch and I was able to try the sandwich out. David asked me to be completely honest, so I’ll do that with a review.

The sandwich is less “fast foody” than the Chick Fil A and Popeye’s chicken sandwiches were used to. The chicken is just the right amount of crispy and very flavorful. I’m not a big fan of pickles on my sandwiches, but their sandwich is served with plenty of pickles…I didn’t mind them.

I loved the soft ciabatta roll that Mamma’s decided to use for the sandwich. I was skeptical at first because I was expecting a bun of sorts, but this works.

You can choose to have this with or without sauce. I highly recommend the Badabing sauce. I ended up looking for things to dip into the extra sauce that was left over at the end.

The sandwich is served with oven roasted potatoes. This adds to making this more of a meal and less of a fast food combo. I dipped the potatoes in the Badabing sauce as well.

The sandwich goes for $12 and it’s worth a shot if you’re near one of the five Mamma Lucia locations in MoCo (Bethesda, Rockville x2, Olney, Silver Spring). 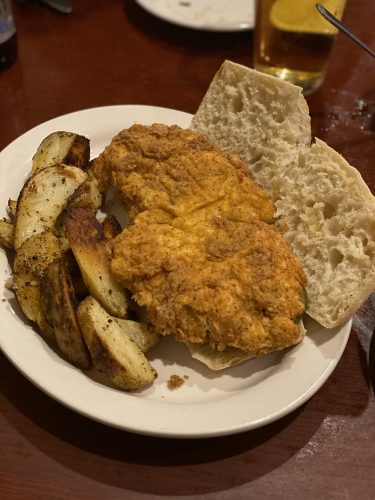 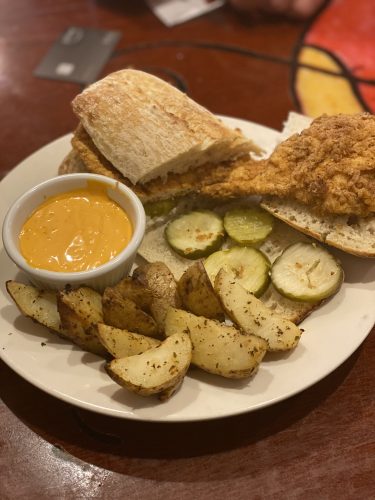