At 10:59pm last night, Montgomery County Executive Marc Elrich directed a tweet at President Donald Trump in response to Trump leaving Walter Reed National Military Medical Center to take a ride in a motorcade to wave to supporters on 355.

We take COVID-19 seriously in @MontgomeryCoMD. We ask our residents to act responsibly with family & friends and we expect the same from our guests. Please think about those caring for you and stay in the hospital until you can return to the White House.” 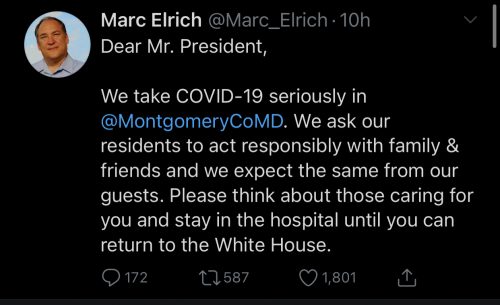 President Trump has been at Walter Reed since Friday, following his COVID diagnosis

Walter Reed in Bethesda is one of the most prominent U.S. military medical centers in the Washington, D.C. metropolitan area and in the United States, having served numerous U.S. presidents since the 20th century.

'
Tagged Coronavirus, Government, MoCo
← The First Ever Federal Monuments are on the Border of Montgomery CountyRegal Announces It’s Closing All U.S. Theaters, What Does That Mean for Us? →