Alex Tsironis
MoCo History
If you lived in or around MoCo in the 80s and early 90s, you probably remember Kim’s Karate. If I remember correctly, their slogan was “Have fun with the martial arts!”

Some referred to Kim’s Karate as “McDojos” since they kind of popped up everywhere in this 15 year span and promoted people to black belts quite a bit faster than most martial arts training centers.

I had a family friend that was a few years older than me that was actually teaching classes to younger kids when he was just 14 years old (I believe he trained with Kim’s Karate for over 2 years before he started teaching classes). He was the reason I signed up for Karate when I was about 9 or 10 years old.

I remember my mom had to sign a contract that was nearly impossible to get out of when I quit three months later. After speaking with her about it a couple days ago, she told me that she signed me up for a year at over $100 a month (this was back in the early 90s, so it was quite pricey at the time). She told me she cancelled the credit card in order to get out of the contract because Kim’s Karate wouldn’t let her out of it even if she agreed to pay for an extra month after I stopped attending. Ultimately, she did sign the contract, but it was 10 year old me’s fault…so I feel like they probably should have let her out.

With that said, my memories of Kim’s Karate aren’t bad. I earned a yellow belt (you started off without a belt, go to white, and then yellow was next). I went from barely being able to do a couple push ups, to being able to do 25 in just a few months. The sensei’s swung this bamboo stick under the classes legs as they held a kick at a certain height…if your foot came too low when the bamboo stick was around you, your foot got whacked. It didn’t really hurt, but I doubt that would fly nowadays. Sparring was fun as well, because we didn’t make any contact. I was able to spar with older or younger kids without worrying about getting beat up or hurting them. I’ve read that the no-contact sparring became a problem for Kim’s Karate students at actual competitions, where sparring was full-contact.

At the end of the day it was a fun experience, but some poor business practices led to the demise of the Karate franchise that swept the DMV in the 80s and 90s. I think a few may still be around, but I don’t know if they’re still affiliated with the original company.

Here’s another photo that may help jog your memory. 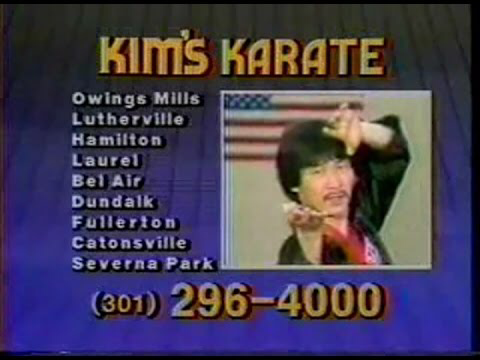