The town of Olney came up in conversation last night during dinner, with one of my friends pronouncing it “All-nee.” The table was split 2-2 on the proper pronunciation of the town’s name, so I decided to throw up a poll on our Twitter account and ask our followers how they pronounce the name. Here are the results: 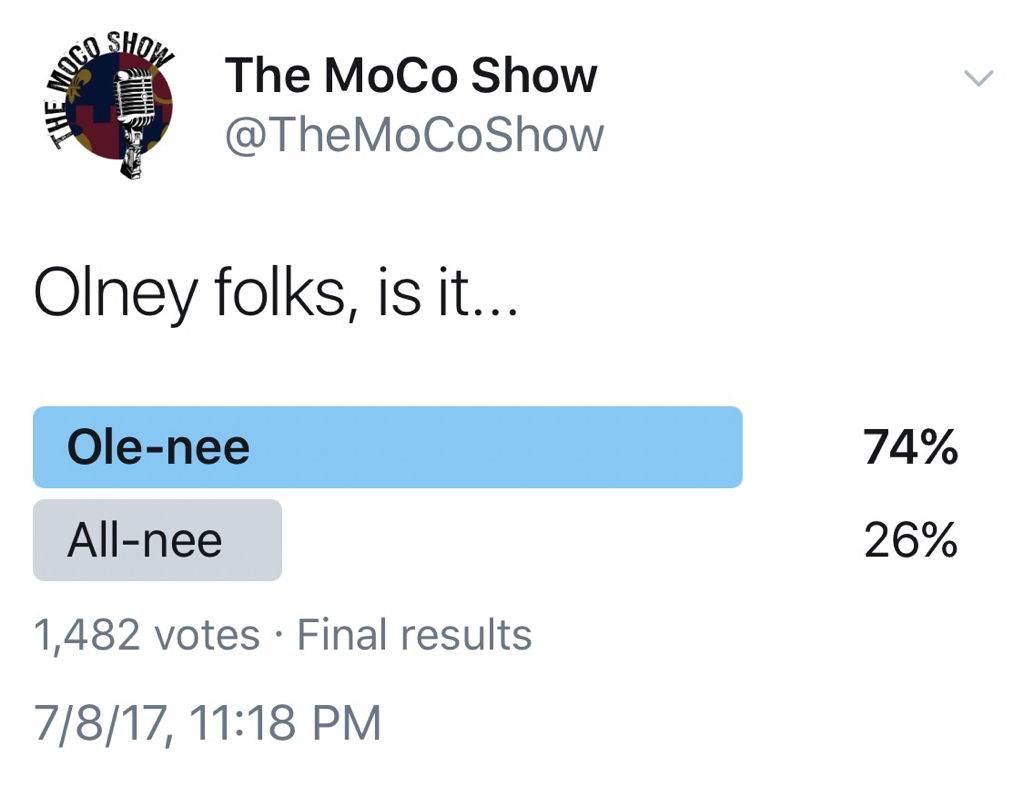 The 24-hour poll yielded nearly 1,500 participants, with 74% of them (almost 1,100 people) going with “Ole-nee” as the correct pronunciation. I’m aware that this isn’t a scientific experiment that has produced an undisputed answer to the question, but it does give a pretty good idea of what a high percentage of people from a pretty big sample size have to say on the matter (most of our Twitter followers fall into the 16-49 age category).

Ole-nee jumped out to a huge lead from the start and never dipped below the 74% it ended with, but this incited some comments from staunch “All-nee” supporters.

Hajjar even said that the Olney dialect has a little more Baltimore in it than other places may have, eluding to the possibility that it’s All-nee for natives and Ole-nee for those from nearby places that may not have the Baltimore influence in their dialect.

I don’t buy that 😊. I asked 4 friends of mine that graduated from Sherwood High School and one that worked there for over 5 years for their opinion on the matter and only one of them went with All-nee.

Then, I decided to do a little research. Olney, originally named Mechanicsville, officially became Olney in the early to mid 1800s (named after the Olney House…which was named after Olney, England). Olney (the English city that Olney, MD is named after) is pronounced Ole-nee in England…with a bit of an accent of course, which supports what 74% of voters went with.

At the end of the day there’s no right or wrong way to pronounce Olney, since both ways seem to have plenty of support. It was a fun discussion that led to some good back and forth on our Twitter page.

​With that said…what do YOU think is the correct pronunciation?

​This article was brought to you by Dr. Li’s Math & English Summer Camp (campus located at the Universities at Shady Grove).
​
Founded in 1995, the summer camp has become a must for many self-motivated students. We make academic acceleration exciting. In the fall, we have the best GT Entrance Exam prep that offers mindful students a thorough review to boost their knowledge and confidence. We also offer a GT after-school program for surrounding schools.