The City of Rockville will read and approve a proclamation at tonight’s city council meeting that will proclaim October 12th, 2020 as Indigenous Peoples’ Day.

Per the document: The day will still recognize Christopher Columbus landing on an island in the Caribbean on October 12th, 1492 marking the European’s first contact with the “New World,” but the proclamation re-imagines Columbus Day as an opportunity to celebrate indigenous heritage and resiliency.

Below you’ll see the proclamation and discussion that will be included in tonight’s meeting. 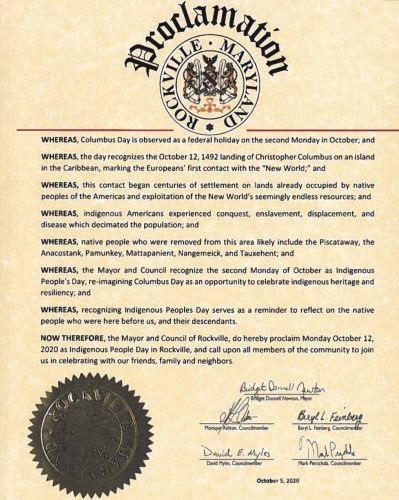 In 1977, the International Conference on Discrimination Against Indigenous Populations in the Americas, sponsored by the United Nations in Geneva, Switzerland, began to discuss replacing Columbus Day in the United States with a celebration to be known as Indigenous Peoples’ Day.

Similarly, Native American groups staged a sort of protest in Boston instead of Thanksgiving, which has been celebrated there to mark collaboration between New England colonists and Native Americans in the first years.

In July 1990, at the First Continental Conference on 500 Years of Indian Resistance in Quito, Ecuador, representatives of indigenous people throughout the Americas agreed that they would mark 1992, the 500th anniversary of the first of the voyages of Christopher Columbus, as a year to promote “continental unity” and “liberation”.

In 1992, the group convinced the City Council of Berkeley, California, to declare October 12 as a “Day of Solidarity with Indigenous People” and 1992 as the “Year of Indigenous People”. The city implemented related programs in schools, libraries, and museums. The city symbolically renamed Columbus Day as “Indigenous Peoples’ Day” beginning in 1992 to protest the historical conquest of North America by Europeans, and to call attention to the losses suffered by the Native American peoples and their cultures through diseases, warfare, massacres, and forced assimilation.

In the years following Berkeley’s action, other local governments and institutions have either
renamed or canceled Columbus Day, either to celebrate Native American history and cultures, to avoid celebrating Columbus and the European colonization of the Americas, or due to raised controversy over the legacy of Columbus
On October 10, 2019, just a few days before Columbus Day would be celebrated in Washington, D.C., the District of Columbia Council voted to temporarily replace Columbus Day with Indigenous Peoples’ Day.