10 Year Old London Navarro, of Gaithersburg, Will be Featured on NBC’s Little Big Shots This Week!

At the age of 6 and a half, London and her 9 year old brother felt they were victims of bullying at their previous elementary school. There was a lot of back and forth between the school system, local law enforcement and juvenile court system, but a solution wasn’t found. Their mother, Kim Navarro , decided it was time for the to learn self-defense by signing them up for a martial arts class– that’s when she discovered Brazilian Jiu Jitsu.
Not only did Brazilian Jiu Jitsu change her life by allowing her to face her fears and the not allow the bullying that had been occurring to continue, but it also brought her family together.
London’s father began training and is now a blue belt and both of London’s siblings also train…often side by side even competing as a family.
London will be on NBC’s Little Big Shots this Sunday night at 7pm! The show is hosted by Melissa McCarthy and is about youngsters who show the impressive talents that set them apart and share their inspiring stories. 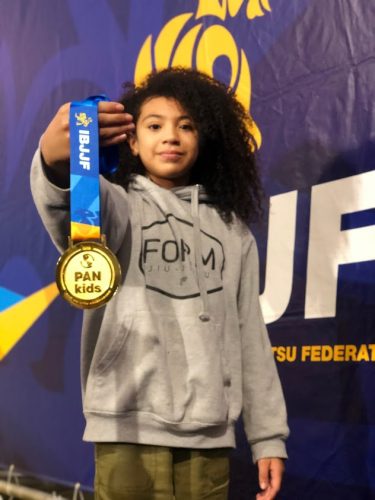